There are a gobs of superheroes/heroes in the Justice League of America.  But we know that it usually doesn’t work out so well with the mob of them in one sitting (take X-Men: The Last Stand as an example).  It’s usually better for the audience to focus on a smaller group, so as not to confused the general population.  So, here’s what’s rumored to be so for the Justice League movie, per the Latino Review: 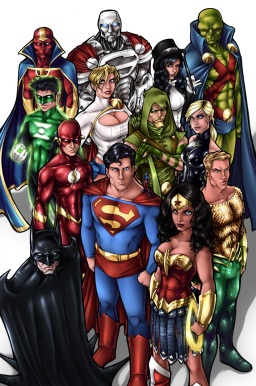 So who made the cut? Superman, Batman, Wonder Woman, Green Lantern and the Flash are at the top of the list. They arguably have the most name recognition, so its no surprise they could form the core of DC’s big budget gamble.

By that time we’ll have already seen Man of Steel, so it’s possible Superman could be the connecting link to introduce the world. Of course, that all depends on what they decide to do with the Baman-sized elephant in the room. Reboot of Christopher Nolan’s Dark Knight trilogy? A continuation? Who knows.

But don’t get too down Justice League purists. The report says we could still have cameos from Martian Manhunter, Aquaman and/or Hawkman popping up in the background. The most likely addition would be Martian Manhunter, since the film is rumored to deal with the intergalactic threat of Darkseid.

Again, this hasn’t been stated by DC Entertainment or Warner Bros., so even though it’s likely that this is the group, it’s not confirmed.  And when it’s confirmed, it’s purely speculation until it is.

So, there’s still a slight hope that other heroes will be involved.  Green Arrow and some of his crew are already on the CW network, and that’s cool and all (really cool, actually), but we can always hope that maybe they can jump on over to the big screen as well.