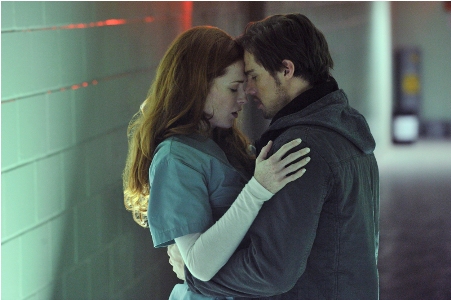 For those of you who haven’t seen the recent episode of “Beauty and the Beast,” you may very well be shocked by now with just the picture.  You can choose to continue to read on, or you can get on that DVR or whatever gadget you got going and watch the show already.

For those of you who have, Jay Ryan talks about what is going on with his character, Vincent Keller, now that he has this little love triangle thing going on, along with the physical changes going through his body.  You know what would be cool, and I might be the only one who thinks so, but for him to turn monster full-time would be awesome.  Sure, you wouldn’t be able to see Jay, but that would definitely be a struggle for any couple or triangle to go through.  Anyway, here’s what Jay has to say about this bump in his relationship with Catherine:

“That is one of his biggest fears — that he bumps into someone very close to him from his past,” Ryan explained. “He packed up his bags — without even leaving a note — and enlisted. He never got to say goodbye, because he enlisted into these experiments and that’s sort of how things started to go awry.”

Could there be a future between Vincent and Alex? Obviously, any such future isn’t forever. After all, Catherine is “obviously his true soul-mate.” But there are problems between Vincent and Cat now. “He sees this fear in Catherine’s eyes,” Ryan said of Catherine’s reaction to his now-mutating DNA. “That’s kind of his biggest insecurity, so it pushes him back quite far.”

The new love triangle will play out over the next few episodes.

I can’t say that this show is a definitely shoe in for one of the best, as it still has some things to fix, I think, but it won’t be leaving the network quite so soon anyway:

And fans can definitely plan on getting many more episodes to watch. Now that the show has a People’s Choice Award, it’s not about to disappear. The actors on the show are pretty happy about this too: “I was shocked and pleasantly surprised,” Ryan said of the award. “We know that we’ve got this amazing fan following — who obviously love to vote. It’s really rewarding, because it lets us know that people are enjoying it and want it to continue… It just shows that the Beasties, as they call themselves, are a force to be reckoned with.”