Okay, so everyone understands, this is a spoiler article for those NOT familiar with the Iron Man comic books.  Read on if you dare.

In the latest issue of Empire Magazine (via CBM) Iron Man 3 director Shane Black gave his thoughts on what Maya Hansen’s significance will be, and why Rebecca Hall was the final choice to bring the comic book character to life:

“It’s one thing we loved about the comic book, which was that it’s someone Tony meets in one capacity at one point in his life, and he proves to be touched by that encounter. We needed a snappy and exciting actor to play the part, and not make it this ‘female scientist who takes off her glasses and suddenly she’s beautiful!’ There’s a certain element about her being the female Robert Downey Jr in a way.” 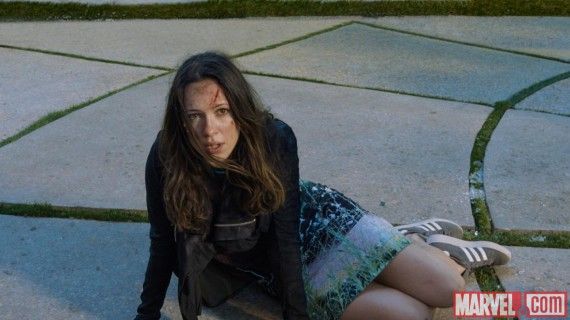 Marvel’s Kevin Feige backs up Black’s optimism, pointing to the fact that up to this point, Tony is without someone to share his personal experiences with. He has a friend to fight beside him in an armored suit of his own, but what’s really missing is someone to know what makes him tick:

“Maya is a scientist who makes a pretty astounding discovery that leads her to places – and some are healthier than others. It’s not dissimilar to what Tony’s been through, and it’s a great parallel.”

But according to Hall, it was her own enjoyment of the series and the talent assembled that convinced her to take the role, not the exposure:

“I’ve never had a huge desire to be a massive Hollywood actor. Yet this is the third installment of a series I’ve really enjoyed, I really like Downey as an actor, and it looked like it would be fun. And it was. It was a very smart set, Iron Man. There’s a whole game of wits going on all the time between Downey and Shane.”

Read the full article at ScreenRant.