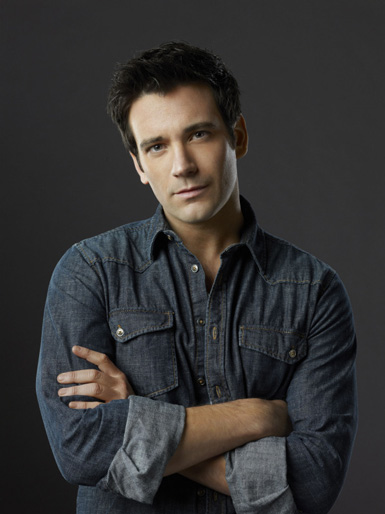 The TV Addict has nabbed another actor from the series ‘Arrow’ to talk about his character on the show, and we love it!  Here’s a little one on one with the actor who plays Tommy Merlyn, Colin Donnell  (reminder, there are some minor spoilers for those who haven’t seen the show or don’t read the DC Comics of “Green Arrow”):

Tommy and Laurel, this is the romance we totally didn’t expect to happen this quickly, this fast.  How exciting has that been for you to be kind of the romantic lead suddenly on this hot show?

COLIN:  I love it.  And I think one of the best parts is being able to work so closely with Katie.  And I think it’s a really interesting relationship to set up.  Because I think everybody was expecting the Oliver-Laurel thing to jump off to a quick start.  I’m loving being able to be a foil for whatever ideas that they have coming up later on.

How do you identify with your character and what’s the biggest challenge for you?

COLIN:  Um, I’m not wealthy, so there’s that. (Laughs) No, I think that there’s a great deal of humanity to Tommy and some, you know, lovely sarcasm and wit that they’ve written into him.  I joke with [executive producer and writer] Andrew [Kreisberg] that Tommy is  able to say everything that Andrew wished he would have been able to say when he was 20 years old.  And it’s great.  I love trying to balance the sort of not-so-great things about Tommy’s character with the things that I see as really redeeming qualities about him, the way he cares about his friends and the way that, you know, he cares about his friend’s family.  And all those interactions with him are very near and dear to him, mixed with drugs and alcohol and sex.

Are you ready to be probably in the next season in costume, a super villain costume?

COLIN:  What do you mean by ready?  No, I mean, whatever comes along and whenever that happens, I think the thing that I’m most excited to find out along with everybody else is how it eventually happens, you know, and when it will happen.  And I think it’s going to be super exciting to see, you know, how they sort of bring it all together and put us at odds with each other.

Did you do research on Merlyn from the comics?

COLIN:  Yeah.  I’ve gone back and read a bunch of the stuff.  And Geoff Johns actually sent out this great package of comic books and sort of tabbed all the places where Merlyn was appearing.  And I’m sure I’ve missed a ton, but it’s been really cool to see, because I feel like even in the comic books Merlyn still maintains this kind of cool distance within the world of the assassins.  He plays an interesting role not only in Green Arrow’s life, but within the world of the assassins.  It’s going to be fun to see how that all plays out and how to balance all that.

Who are your comic book heroes in general?

COLIN:  Superman. Grew up, loved being Superman.  When I was, I think, 20, my parents bought me “The Death and Life of superman,” the novel.  I loved it.  And I have read it about ten times since then.

Can we talk women for a second? I was just wondering about your fan base.  Do you get lots of proposals?  Do you find that women are throwing themselves at you in bars, things like that?

COLIN:  (Laughs) I’ve got Stephen [Amell] as a great barrier.  We have some wonderful fans, and I’ve got some lovely people on Team Tommy, which has been great. And people are loving the Laurel/Tommy relationship, which I think is great as well. I would love for people to root for that as much as they would root for Oliver and Laurel to be together.

When you read the project for the first time, what did you think was special about it?

COLIN:  I loved how much of a human approach they had taken with a very extraordinary situation.  I liked the wit of the character specifically.  I loved the action, and I loved the risks that they were taking, especially for a network like CW.  I thought that they were really trying to push the envelope with the show and try to make something really, really extraordinary.  And I could tell that on the page, and then we got into it and it really took off from there.

Aside from the show being on The CW (admittedly, I do watch ‘Supernatural’ and ‘Arrow’ most loyally than any other show on TV), and despite the turn-off for heterosexual men who can’t stand to watch Stephen Amell with his shirt off in every episode, the show is one of the network’s strongest new shows since… well, Supernatural debuted.  Go watch it!

You can read the full article at the TV addict.