See, good things do happen to good people sometimes! Marie Lu‘s sequel to the “Legend” trilogy was released on January 29, 2013, and after 1 week, it debuted at #2, bested only by the wonderfully written “The Fault in Our Stars” by John Green (to which I cannot deny that book definitely deserves to be #1 even after 10 weeks). Not only that, but the first book sticks itself at the top 10 as well, probably due to those whose interest was peaked close to the release of, and thereafter, the second book. With a movie in the works for it (Jonathan Levine is set to direct, with a script currently being worked on), things are looking up! 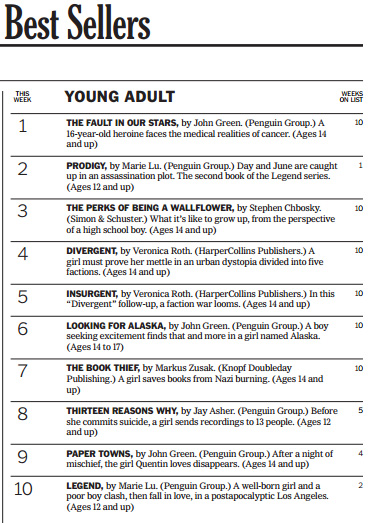 Here’s what Marie had to say about it:

Words cannot express how incredibly lucky I am to have the most wonderful, passionate, sweet, supportive publishing team at my side, and the most amazing agent. Team Putnam/Penguin, I love you guys. Agent Kristin, you rock socks. Most importantly, thank you to all of you who supported the books. I can’t say it enough! ♥♥