Let me say first off that I did read the book.  And even though there were some differences, essentially, the movie captured the feel and the main story of the novel.  And I really enjoyed how the movie turned out overall.  In fact, I was rather impressed with how much I did enjoy this book-to-movie adaptation. 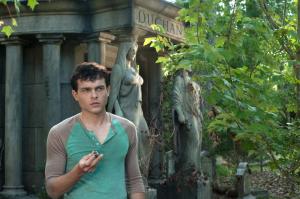 Being a fan of the books, the fandom’s natural tendency is to nitpick at everything that’s different from the book from what the actors are wearing to how they’re speaking to how tall or how short they are (granted you don’t want someone who’s 4 feet tall to play someone who’s supposed to be 6 feet tall, but I’m not talking about extremes).  This in itself is somewhat of a disadvantage, because we as fans leave nothing to alternate interpretation.  If it isn’t how you imagined it, automatically it’s under severe scrutiny.  If the fans have memorized specific details that they find important, and it doesn’t show up on the big screen, well, then, all of a sudden the movie is “ruined” or “NOTHING like the book.”  The scrutiny can be as bad at Emily Asher and Savannah Snow’s prejudice against Lena Duchannes.

With that said, I found that I probably had an easier time accepting whatever changes they made in order to get this story made.  The book is huge, so there’s just no way they can possibly fit every single detail into the movie (the book is over 500-pages, dude!)  So, yes, there were things or characters that you may have wanted to see on screen but aren’t there.  And there are things that weren’t in the book that are in the movie.  But there’s a reason for these things, because you can’t just cut here and there and expect people who haven’t read the book to understand the character or the story if you do that.  So, the screenwriter does what he can to make the story flow as much as possible to avoid confusion. 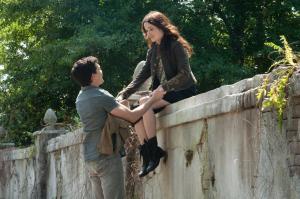 Ethan helps Lena over the wall

Okay, now onto the actual review of the movie, and some of which I will be quoting from another review, because he explained it better than I could.  First off, I loved it!  I loved the interpretation of a lot of it. I loved the actors that played the characters.  And I loved the witty and quick humor of the dialogue, especially in the introduction of the characters and that between Ethan and Link as well as Ethan and Lena.  The actors played their roles superbly, most importantly the newcomers and leads of the movie, Alden Ehrenreich and Alice Englert.

It’s surprising to me to know that Alden had not even prepared for the role, not even auditioned for it, and yet he embraced Ethan as if he had played him for years.  There’s this non-important scene in there right before he meets Lena that I absolutely thought made his character so endearing and so real and it has nothing to do with the book, but it made me believe in Alden as Ethan.  Alice’s character was probably a bit more complex because she’s the one having to deal with the struggle of not only being a teenage girl that can’t fit in, but also dealing with being a caster that may not have a choice in her own future.  But Alice played Lena so well, brooding yet not being overcome by moodiness, and even being able to smile and laugh despite what becomes of her on her 16th birthday.   Lena is vulnerable at times, but not weak, and it shows.

The major supporting cast was really well suited for their roles.   Jeremy Irons was fantastic as the curmudgeonly Macon Ravenwood, as I believe the authors pictured him as Macon in the first place, and he does the Southern drawl very well, I might add.  Emmy Rossum can definitely play the sexy minx part very well, as well as the scared, innocent Ridley in one flashback scene.  Thomas Mann seems to have been born to play a Southerner himself and does well enough for the bit of time he gets in the film as Ethan’s comedic best friend Link.  I’m sure he wasn’t complaining all too much though considering he got to make out with Emmy more than once.  I imagine Emma Thompson loved chewing up every scene she was in, no matter if she was Mrs. Lincoln or Sarafine, because either way, I loved that she went a little campy without being unintentionally funny.  Obviously, it was when she was playing the dark caster Sarafine, that’s where she really wanted to play it out, and the confrontation between her and Macon was delicious fun.  However, I think this campy-ness did slightly downplay her darkness a bit, and you only get to see her really frightening in one brief scene with Ethan. 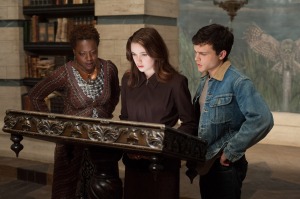 Amma with Lena and Ethan

But if I had to pick my favorite supporting actor for this movie, it would definitely be Viola Davis.  I won’t spoil it, but there’s a scene in which she realizes something has changed in Ethan.  That little scene, even though I don’t think it’s in the book, truly stands out.  She doesn’t even say anything in that moment, but the expression on her face just breaks your heart because you feel it, too, and you understand, and she just conveys all that angst that you have on her face.  I’m even glad that they combined the characters of Marian and Amma into one, because that gave Viola more screen time.

For the book reader, the changes will probably be significant to you, and you may hate that.  You may despise everything they did differently, but again, I actually didn’t mind the changes.  As a major fan of movies in general, I can appreciate the work they did in trying to strip down the film to its core while make both a movie that will be liked by both readers and non-readers of the book.  That’s pretty hard to do. 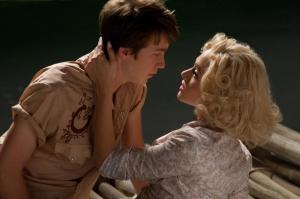 Sure, if they continue with the franchise (depending on the success of this film), more things will have to change to adjust for what’s been done in this movie, but I honestly don’t feel that the changes made hurt the main storyline, and that’s essentially what it comes down to.  The core of the story is always what a movie needs to focus on, because there’s just not enough time for all the subplots to be included, and there’s plenty of asides in this book.  I liked most of what director Richard LaGravenese did for the movie, however, it did seem at times a bit choppy from one scene to the next.  The CGI itself wasn’t perfect, but it wasn’t heavy-laden with effects where it didn’t need it.  This story deals more with human interaction and emotions anyway, which is why I’m so glad that had such a talented cast to portray the characters.

I hope that the fans of the books will keep in mind that a movie based on a book will never replace what they imagined in their head.  That’s impossible.  But that they allow this version as a respectful visual take on the characters of the first book of the Caster Chronicles.