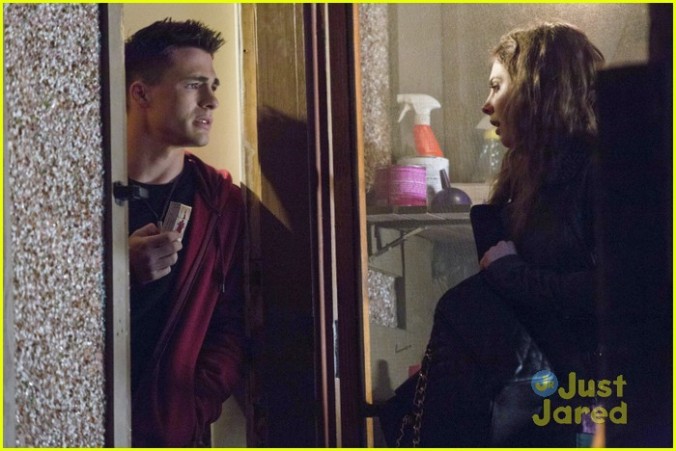 We finally get a glimpse of Colton Haynes as the purse-snatching Roy Harper, albeit the whole episode airs tonight anyway.  In the article by The Hollywood Reporter, it seems that there might be more to Roy than the idea of him being the future sidekick for the Hood, as it is in the comics.  Because we don’t know how close the show will be to what it has on print, but it’ll be fun to watch.

“Roy is still a bad-ass like he was in the comics but the Arrow producers have given him a heart,” Haynes tells THR. “He’s definitely the bad boy that piques Thea’s interest but he’s doing the things he has to do to live the life he’s been given in the ghetto of [Starling City’s] the Glades.”

So, what of him being Speedy, since Oliver actually referred to Thea (Willa Holland) with that nickname in a previous episode?

The drug Vertigo, that was introduced in another previous episode, plays a slight part role in the connection between Roy and Thea, aside from the purse-snatching thing:

“It goes back to when you’re in kindergarten when the boy pushes a girl down and she falls in love with him, that’s what’s happening,” he says. “Since Thea got in trouble with Vertigo, that also piques her interest so right off the bat it’s an instant connection. She won’t go away and she’s chasing Roy Harper and eventually he has to let her in.”

Later on, it seems that Roy finds that not all people are as hard-hearted towards him as he might’ve thought:

“It’s this weird feeling he hasn’t really encountered because his parents weren’t in the picture and he had to grow up and take care of himself. He’s introduced to the life of the right with Thea and it will be interesting to see if Roy is going to manipulate her and take advantage of her or follow his heart,” he says.

From the clip below, it seems that Colton will fit in nicely with the dramatic tension of the show.  He certainly looks good, for those who are interested in that factor.