In a recent interview at the Berlin Film Festival, Emma Stone was on hand to answer a few questions about her animated venture with ‘The Croods’ (as the voice of Eep), as well as a some other topics.  This is what she had to say about the DreamWorks Animation pic: 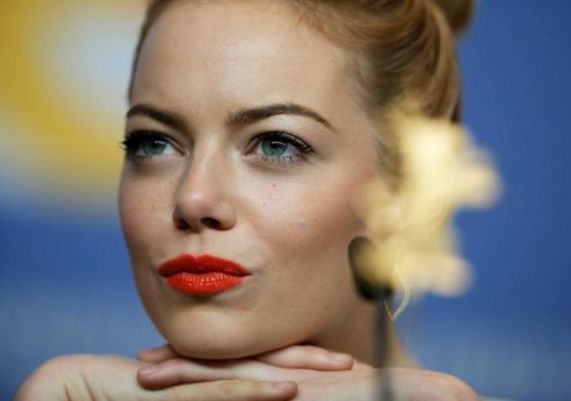 How did the experience of voicing an animated character compare to live-action acting?

The experience was a lot more like traditional acting than I expected. I thought I was just gonna be in a booth “doing a cartoon voice.” I mean, the first year of the project – because you only go in once every couple of months, it’s the easiest, most fun job in the world – I would go in and I was voicing Eep like [perky, high-pitched] “Hi! Ok! Great! Suuper” in this higher cartoonish register. And then once I saw the animation and I saw her build, you know, she just felt like she had a lower register, so I ended up having to make it a lot truer to life.

Do you think you can interpret “The Croods” as politically or ideologically standing against conservatism? [???!?] 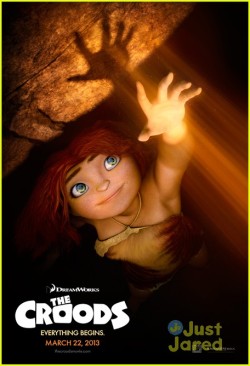 I have literally no idea what you’re talking about. It’s… man, calm down. You’re firing on all four burners, I’m at a lower speed, on a different plane.

Have the roles you’ve taken helped you learn about yourself?

Yes, very much so. I have a friend who says that roles choose you at the time that you need them most, and you have to believe, as an actor, if you didn’t get a part that you really, really wanted and it went to someone else, it was because it was theirs to begin with. Just like a relationship, if you don’t end up with that person that you thought was the love of your life and they fell in love with someone else, they weren’t yours, it wasn’t meant to be. So the roles that have come into my life have taught me – and in that time period maybe I didn’t even know it but whatever came up or whatever it is that you have to express at that time, has benefitted me in a particular way.

You can read the whole interview at The Playlist.