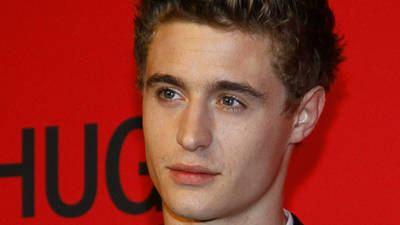 Here’s a bit funny story.  Max Irons apparently did not know how to drive prior to filming The Host.  So, when it was time to actually get behind the wheel, he was scared that something terrible would happen:

He tells Live magazine, “I learned to drive on the set of The Host… I was terrified of crashing a car and hurting Saoirse [Ronan]. I’d never actually driven before. I was put in this World War II Jeep and told to drive across this range in the desert as fast as I could. I did it, which was pretty bad, and then when I got back, they put Saoirse in the car next to me and said, ‘Now do it again.’ I could see her dad eyeballing me in my peripheral vision. All I could think about was what the hell would happen if I crashed and something happened to her.”

I still find it interesting that some adults just do not know how to drive.  Here’s one example, though, that there are such people that exist and they are successful.

And here’s a couple of cool photos of Max and co-star Jake Abel meeting up with Imagine Dragons prior to their concert in Minneapolis, Minnesota.