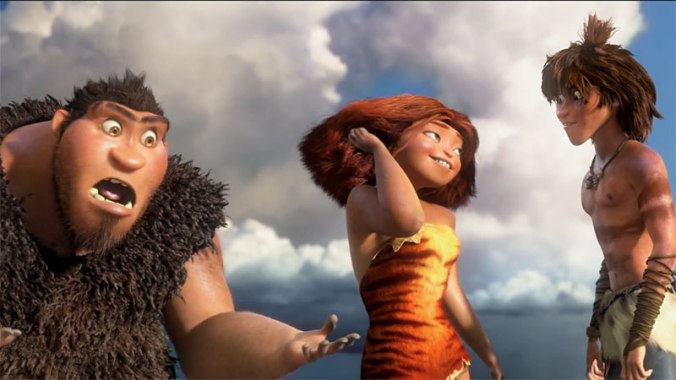 As we’re winding down to the release of The Croods in theaters, Nicolas Cage, Emma Stone, and Ryan Reynolds got to talk about working on the film and playing a unique set of characters, as well as seeing them on screen.

Q: What did you guys think when you saw your characters for the first time?

Stone: I agree. I had such an incredible time watching the movie. I’ve gotten to see it twice now, once in the earlier stages and then once in 3D in Berlin, we watched it with a big audience. It’s such an incredible, stunning visual movie, but its also sweet and funny and full of heart.

Reynolds: I felt the same. I saw the journey that the film takes, you spend two-and-a-half years working with it, the actor not necessarily being as integrated into the process as you are making a live-action film. I would see it go from sketches to slightly more animated drawings to this thing that just jumped off the screen and into your face in such a way that was so unexpected and incredible. Particularly in 3D, which is something that’s easy to be cynical about these days, but this is something that’s so unbelievably effective and it works in such a way that brings you right into the movie.

Cage: I don’t see it as a children’s movie, but one of the things that makes it work is it doesn’t condescend to children. You know how intelligent children are, you know they appreciate good music and good drawings. Any family film that works with the community of children is one that doesn’t talk down to children.

Q: What helped you get into the mindset of playing a caveman dad?

Cage: Well, that is a good question. It’s been a long road with myself and Jeffrey Katzenberg. At one time we were talking about “Shrek,” and I just didn’t want to look like that guy. Maybe I should have done it, looking back… We kept trying to find the right match, then they all came out to New Orleans to meet with me and showed me a picture of Grug. “Look Nick, this is how we see you!” “Well I don’t really think I look like that, but I’ll do this.” What really got me about Grug is his arc, his emotional transformation. He goes from being this incredibly overprotective father, who’s more surviving and not living, and then he becomes able to let go and live. I like that and that’s what appealed to me most. I like a movie that can make you laugh and make you cry, and this movie does both.

Q: Where would you like to see your characters go if there’s a sequel?

Reynolds: Well, I’d like a shirt. (laughs) No big deal.

Cage: I want to see The Croods in outer space. (laughs)

Stone: I like that, I’m gonna stick with outer space and getting Guy a shirt.

Cage: It’s like “The Flintstones” and “The Jetsons” all in one movie!

Q: If you were sent back to pre-historic times what is one piece of technology that you would absolutely miss?

Reynolds: Antibiotics for me. Penicillin, right?

Stone: You picked the best thing.

Q: What was it like being in the recording booth making all those grunting and groaning noises?

Cage: The most interesting day was when they brought in a tank of water and held my head under it so I would make sounds like I had bubbles coming out of my mouth and did dialogue with my head submerged in water.

Reynolds: They waterboarded you???

Stone: They did not do that to us!

Stone: That’s gonna be a headline.

Reynolds: I was most shocked by the fact that when I first signed on and decided to work with these guys and jump into this process. They said the sessions were going to be two or three hours. I thought, “Two or three hours? That’s crazy, what are you Canadian? C’mon! Let’s work a full day here.” Two hours into it your voice is gone. You’re playing the most outlandish version of yourself. They’ll say nothing’s too grand, you can take it over the top. Two hours into it you are tapping out. You’re ready to go home, you have no voice left, and zero energy.

Stone: Again, I agree. That was actually my favorite part, the sounds of physical exertion, because it was the part I didn’t think about when I signed onto the movie. I was just thinking of the fun of playing Eep and I didn’t really think about when she runs and swings and throws someone over her shoulder. That was the most fun and imaginative. It was really playful in the room, too. A lot of movement.

Read the full interview at ComingSoon.net or check out our Croods videos here.