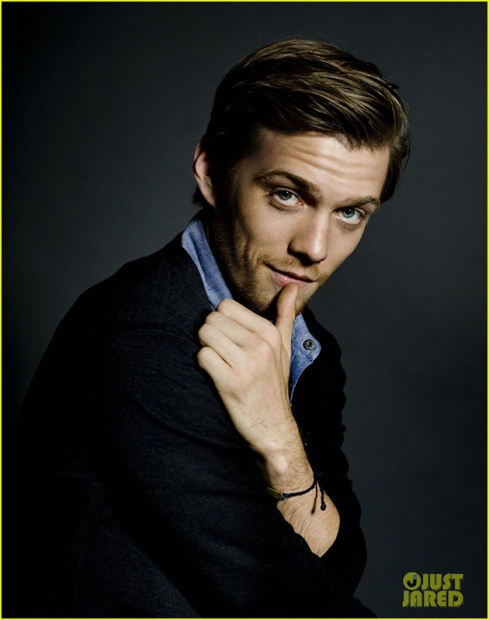 Here’s an interview with Jake Abel, who plays Ian O’Shea in The Host, that was done exclusively for JustJared.  And check out the cast portrait with him, Max Irons, Saoirse Ronan, and Diane Kruger, after the jump.

JustJared: What about your favorite prop from set?

JakeAbel: I actually took something from [my character] Ian’s room. He had a really good collection of books. There was a Rudyard Kipling book, “The Jungle,” was in it and a couple other short stories. It was all beat up and really old. I think it was published in the 70s. I have a tattoo of a Rudyard Kipling poem “If,” so I’m a big fan and that was my steal from the set.

JJ: What do you like most about your co-star Max Irons?

JA: Max has become one of my closest friends actually. I trust him tremendously. We’ve done a lot of interviews together and when one starts to falter, we pick the other one up. I feel safe around Max (laughs).

JJ: What about Saoirse Ronan?

JA: Saoirse is great. She’s a pleasure to work with. She’s disarmingly talented in front of the camera as much so as behind it when she just turns it off and becomes a kid again. She’s just a joy to be around. She’s got a great energy about her.

JJ: Describe your co-stars in one word. First – Max?

JJ: We also hear you play pranks on Max. What’s the best prank you’ve pulled on him?

JA: Well, he made the mistake of informing me that he has a fear of bugs. One day, he knocked on my trailer because there was something in his trash can and I went to save him from it, and it was a moth. So I tweeted that day, I had a bunch of people bring fake bugs to our book signing at The Grove. When he wasn’t looking, I put one on his shoulder. It was there for a minute and when he moved, it fell in his lap. He was like, “Ah!”

JJ: Do you have an unexpected question for us to ask Max?

JA: Ask Max what Tarquin Wong is up to these days! And then make him tell you the story. He’ll know what’s up (laughs).

JA: I think it was The Place Beyond the Pines, the Ryan Gosling movie.

JJ: Do you watch TV or more film?

JJ: What was the last song you downloaded?

JA: Langhorne Slim’s album, which is a guy out of Pennsylvania. I bought him and Alt-J, this band out of England. Those are the two albums I bought last.