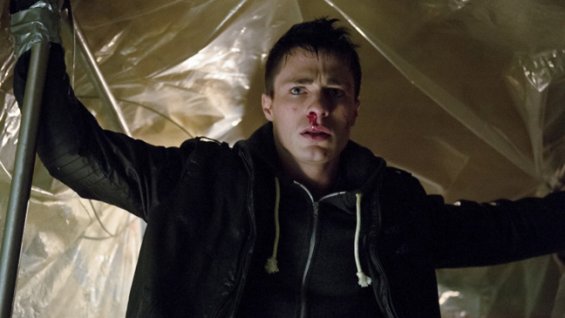 In case you missed this article, The Hollywood Reporter got to talk to Colton Haynes about his role as Roy Harper in Arrow and how much more we’ll be seeing of him in the last episodes of this season.

There’s this really great scene [in episode 18’s “Salvation”] where Thea, Oliver and also Tommy (Colin Donnell) – there’s a newscast going on and Roy is one of the people kidnapped. The scene gets really emotional. Oliver’s like, “Do you know that kid?” She gets emotional. Oliver’s obviously reacting in a brotherly way but also having to know that he’s about to embark on this mission to save all these people who are being wronged. It’s going to be interesting whether or not things start going back to him, and Thea starts trying to find out who the hood is because she can’t go to her brother and try to find out. Oliver’s going to be a sticky situation.

Haynes: She seems like a little troublemaker, these past few episodes. Working with Roy is going to tap into that, and [we will] see how much of that he can use to his advantage – to find out who the hood is, or how he can benefit from the knowledge that she’s given by working at CNRI.

On him being in the remaining episodes of this season:

On where Roy is by the end of the season:

Haynes: We just got the script for [episode] 22 last night (March 25). It’s going to get really, really fun towards the end, because everything is somehow pointing toward the Glades, and obviously Roy’s from there. Everything is starting to map out. Everything is wading its way to where where Roy and the hood — and Oliver — are going to have a lot of interaction together. I’m still unsure: Which way is Arrow going to take Roy?