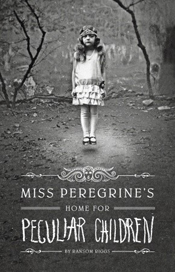 I have yet to read it myself, but I hear it’s great (and it’s on my Goodreads list)!  And the cool thing about it is that it’s going to be made into a graphic novel!  I have this thing for graphic novels.  I don’t collect a whole lot of them, but I do have the first volume of Stephenie Meyer’s Twilight graphic novel as well as the first volume of The Infernal Devices graphic novel (of which I definitely plan on getting the second volume for as soon as it’s available).

So, if you’re enthusiastic about this foray of YA literature being turned into graphic novels, then you might want to add this to your list to get.  Not only is Yen Press involved, as it has been with other YA-based novels, but Cassandra Jean is also illustrating it.  If you’re not familiar with Cassandra Jean, she is highly involved with Cassandra Clare’s Shadowhunter books and is currently presenting TMI and TID readers with her Shadowhunter Tarot Cards.

Here’s more on the Ransom Riggs novel being turned into a graphic novel:

According to senior editor JuYoun Lee, the publisher’s original motivation for its adaptations, which include Cassandra Clare’s The Infernal Devices series and Stephenie Meyer’s Twilight Saga, was to bring more readers to graphic novels. “Historically, comics in this market have targeted a relatively small demographic,” she says, “and we very much want to see the category break outside of those boundaries.” To achieve this, Yen Press treats graphic novels as a medium instead of a genre, one with visual appeal and the potential to tell any kind of story.

Choosing which books to adapt requires a nuanced approach, one that not only looks at what’s popular but also considers “titles that seem to naturally lend themselves to the medium,” Lee says. Miss Peregrine’s Home, with its visual component and subject matter – a secret school for kids with supernatural powers – was “the perfect choice for adaptation,” says Lee.

The next step for Yen was matching an artist to the project. “It’s not just the character designs or line work but also how the artist lays out the pages,” Lee says. “All of these elements set the tone for the book.” What distinguished Miss Peregrine from Yen Press’s previous adaptations was the original book’s visual aesthetic, created by the old photographs. The challenge was to find an artist whose style would complement the photographs, instead of just mimicking them. It didn’t take long to choose Cassandra Jean, who had previously illustrated Yen’s graphic novelization of Kami Garcia and Margaret Stohl’s Beautiful Creatures. “While I was reading Miss Peregrine, I found myself imagining the pages in her style,” Lee says. 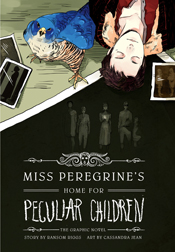 The actual adaptation is an arduous process, one that requires careful attention to the source material, along with the ability to tailor the narrative to the medium. Jean began by, as might be expected, reading the book, fastidiously highlighting and taking notes on any description she found, and making her initial sketches. After some input from Lee, she then created thumbnails for the entire plot and together they decided which scenes to include and how much space should be given to each. Both Lee and Jean say this stage took the longest – a couple of months – but that it’s also the most important leg of the process. Once this is done, Jean created the final inked and colored pages. At various stages, they consulted Riggs, who provided feedback.

“When adapting an existing work,” Jean says, “you have the bonus of not having to start from scratch. Everything is already laid out for you from beginning to end. On the other hand, these are existing stories that people have already read, and love, and so you have to work extra hard to make sure you don’t disappoint anyone.” Both Lee and Jean stress the importance of conveying the message of the author while crafting a product that can stand on its own.

Miss Peregrine’s Home graphic novel is currently being serialized through Yen Plus ($2.99/month); the complete hardcover edition is scheduled for October with an estimated first print run of 50,000. Promotion for the book will include samplers at BEA and a presence at San Diego and New York Comic Con, as well as online advertising. For Lee, the graphic version of Miss Peregrine’s Home, as with other Yen Press adaptations, not only allows more people to enjoy Riggs’s story, but also creates common ground for fans of the original novel, comic book enthusiasts, and reluctant readers. “Bridging these worlds,” she explains, is Yen’s goal.