I’m sure I’m not the only one happy to know that Kelly Hu‘s character, China White, will be returning in the second season of Arrow, although it’s probably not surprising to know that either. It’s just good to have confirmation of it, especially since The Hood plows through quite a few villains, and will be plowing through some more in this next season.

This doesn’t mean that they’re stopping at bringing back Kelly.  But of course they want to keep some mystery as to who’s going to show up on the show.

“Part of the enjoyment of Season 2 for us is how do you combine the old — not the old — but the Season 1 villains with the new Season 2 villains,” Guggenheim hinted. “That’s part of the fun of the show. It’s part of the fun of any superhero show. The superhero mythos, the rogues’ gallery. I think we’ve done a fairly okay job of rounding out his rogues’ gallery, and it’s about building onto that in Season 2.”

And if you’re a big fan of John Barrowman, you’ll be overjoyed to know that he will also be returning to play villain Malcolm Merlyn.  However, Guggenheim doesn’t want you to get too excited about it. 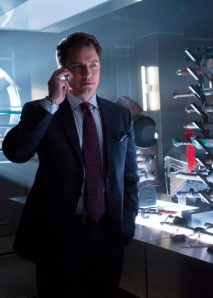 “We’ve confirmed that John Barrowman is coming back,” said Guggenheim. But then the producer added, “We are a show that does flashbacks.”

I wonder if that means we’ll be seeing any flashbacks of Malcolm’s son, and best friend to Oliver Queen, Tommy Merlyn, played by Colin Donnell.  I guess with a show like this, anything’s possible.