Check out this interview with Arrow‘s David Ramsey, who plays John Diggle on the show.  There are *mild spoilers* regarding season 1 of Arrow.

NERDIST: Arrow was one of our favorite new shows last year and your character, John Diggle, was a part of that. He had a very interesting arc in the season; how much of that did you know going in?

DAVID RAMSEY: Well, I knew some of it. Greg Berlanti, Andrew Kreisberg, and Marc Guggenheim were very forthright in letting me know that Diggle would be the first one to know Oliver’s secret, that he would be the first one to make a decision as to what to do with that information. So, they told me that I’d know the fact that Oliver really was Arrow, and they also set up the Deadshot saga between Diggle and Oliver and Diggle and Floyd Lawton, who became Deadshot. The writers had a clear trajectory of where Diggle would be going, particularly with his relationship with Oliver and his relationship to being the hero. They absolutely knew he’d be a mentor to Oliver in that first season.

N: Diggle’s very much a partner to Oliver and, as you said, a mentor; were you and the writers conscious of making sure he wouldn’t just be relegated to “sidekick” status?

DR: Yeah, that’s a good question. First of all, these writers are very good, and they decided to put a line in Diggle’s mouth in that episode where he decided to join forces with Oliver where he says to him, “I’m not your sidekick.” So, they already had a clear vision that they did not want to make him a sidekick, but there were certain lines added or taken away to make sure he continued down that path, because it’s all about tone. And, yes, it’s very easy to get into a situation where you have the hero and you have his partner who is, for all intents and purposes, a sidekick. But, throughout the season, the clear vision that has been set for Diggle is that he’s not one, and everyone has done everything in their power to make sure that idea is not promoted and that he really is a partner.

But, that being said, I think a big part of his purpose is to make “The Vigilante” into the “Green Arrow,” and that’s meant a number of things – mentor, friend, partner, and maybe even sometimes sidekick, but I think for the most part, Diggle has served as a mirror for Oliver to show him exactly what the “real” is, so to speak. Both of these men are very proud, both of these men have tremendous problems forming attachments, and I think Diggle sees himself in Oliver.

N: Diggle is a wholly new character for the show, not reflected in the comics before the premiere, so how much freedom did you have in shaping the character’s personality and traits?

DR: They gave me complete license to create Diggle. Obviously they told me the parameters, that he did three tours in Afghanistan, that he was Special Forces, and that he was probably a guy from the streets who honed himself into this skilled military expert. That was about all they gave me, and then they took the reins off and said “Okay, go run with it now.” Between the efforts that I put in and their really incredible writing, now Diggle is an official DC character, which is something that I’m pretty proud of, and it’s also a testament to the fans and how they feel about him that now he’s a real life DC Comics character. So, yeah, they gave me some license, within these parameters, and I’m just proud of where Diggle’s gone. 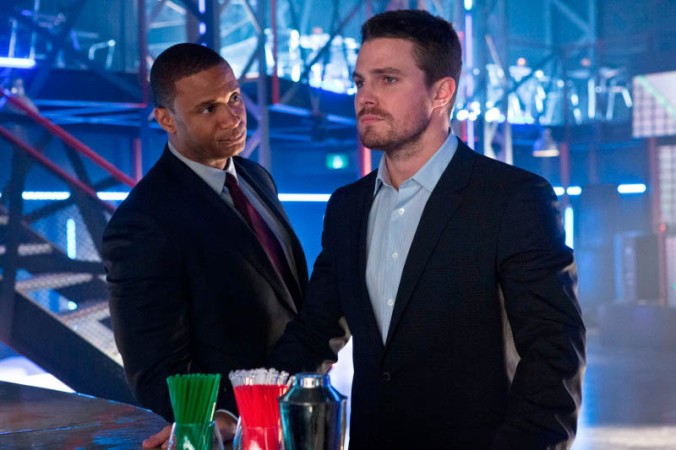 N: The writers have given you an archenemy in the form of Deadshot, as you mentioned before. How did it change the inner resolve of Diggle when he found out that this is the man who shot his brother and he now has a very clear focal point?

DR: You know, you asked me the question earlier about me working with the writers in terms of shaping this guy so he’s not a sidekick; it really was a collaborative effort between me and the writers about Deadshot. Deadshot is the one, you’ve seen in Season One or you will see if you watch the DVD and you’ll see throughout Season Two, who represents the arc for Diggle. You find out so much about Diggle through Deadshot. He is the thing that makes Diggle go from “You must be careful how you kill” to a sense of “Some people absolutely deserve to die.” And this isn’t founded on anything necessarily outside of cold vengeance. So, I think we see a shade of Diggle when it comes to Deadshot that we haven’t seen before. Before we find out that Deadshot is the one that killed Andy, Diggle’s brother, we see a guy who says, “Hey, we have to be very careful how we kill, who we kill, blah blah blah,” and once Deadshot comes on the scene, and Diggle finds out that this is the man who took his brother’s life, we see a different shade. It’s not overt, but you see that this is the man who broke his heart in taking his brother, and what that does to Diggle in terms of his own quest is very interesting. There’s a shade of grey that I talked long and hard about with the writers, and it’s just a great storyline for Diggle.

N: What can we expect from Diggle going forward into Season Two? Will he get more missions of his own, maybe not only tied to Deadshot?

DR: Yeah. You know, it’s interesting you say that, because in the first season, Diggle really served, as did most characters in the Arrow Universe of the first season, as a catalyst in which the vigilante becomes the hero. He was not Green Arrow in the first season; he’s Green Arrow in the second season. And Diggle was, probably, dare I say, the biggest part of creating a moral center that all heroes must have to really be a hero. The moral colors that Diggle brought to Oliver’s universe were something he did not have before. He was a trained killer on a mission of havoc propelled by his father and nothing could stop him. Nothing. And he came close a number of times to death that if Diggle had not been there, he would have certainly died.

All of this, I think, was to bring Oliver to the place where he is in the second season where he does become the bonafide hero. Diggle now is really, I think, an even partner now with Oliver. He still serves as mentor to some degree, but this is much more of an equal partnership. And, to that end, the answer is yes; you will see Diggle tackle missions of his own, because now we’re looking at a partnership where there are things that Diggle wants to do and now Oliver assists Diggle as opposed to the other way around.

You can read the full interview at Nerdist, where he talks about his favorite moment on the show.